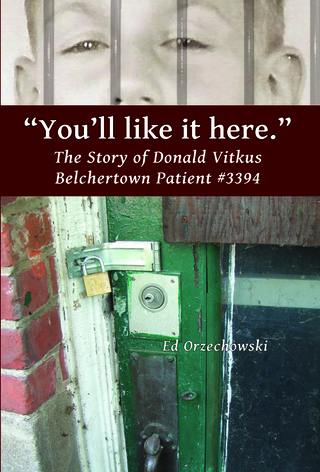 You'll Like It Here--The Story of Donald Vitkus, Belchertown Patient #3394

AUTHOR’S NOTE: This is the true story of the life of Donald Vitkus, as he told it to me. It is a story of the resiliency of the human spirit. The result of more than 40 hours of interview, this is Donald’s recollection of growing up at Belchertown State School, how that experience shaped the rest of his life, and his passionate desire that we never return to those days. In reconstructing conversations and events, I have made every effort to remain as accurate and faithful as possible to his account. In the interest of privacy, names of some individuals have been changed.
In 2005, I assisted Benjamin Ricci, a retired professor from the University of Massachusetts in Amherst, at a book signing at nearby Holyoke Community College. Ben was the founder and tenacious heart of Advocacy Network, Inc., a nonprofit that advocates for the rights and care of the developmentally disabled, and I was editor of the organization’s newsletter. My wife Gail and I are co-guardians for her sister Carol Chunglo, who is severely autistic, and we both serve on the Advocacy Network board of directors.
Ben was at HCC to discuss his new book, Crimes Against Humanity (iUniverse 2004), a chronicle of Ricci v. Greenblatt, a 1973 federal class action lawsuit against the Massachusetts Department of Mental Retardation. The book is an unflinching account of the horrific conditions that existed at Belchertown State School, a nearby institution for people who were referred to as mentally retarded, including Ben’s son Bobby and my sister-in-law Carol.
Following the presentation, a member of the audience approached me. Donald Vitkus, a soft-spoken man in a tan leather jacket, was then a 62-year-old student at HCC. I didn’t know it at the time, but he was president of the school’s Human Services Club and had been responsible for arranging Ben’s talk. Donald told me he had grown up at Belchertown, and was looking for someone to help him write his life story. That conversation evolved into this book.
Donald’s voice is the voice of Bobby Ricci, Carol Chunglo and the thousands of others who lived at Belchertown and similar institutions across the country in the mid-1900s. Their experiences vary, but what they endured they hold in common.
Thank you, Donald, for trusting me with your remarkable story.
—Ed Orzechowski

Synopsis: In 1949, six-year-old Donald Vitkus is committed to Belchertown State School, an institution for “retards,” in rural western Massachusetts. Spread over 800 bucolic acres, Belchertown opened in 1922 as a self-sustaining, progressive institution for the feeble-minded, but by the 1950s it is a place of squalor, neglect, and abuse.
In the midst of World War II, Donald’s young, unwed mother had given him up to the state, 27 days after giving birth. Bounced from one foster home to another, Donald was slow to develop. Tested at age three, he was determined to have an I.Q. of 41, and was labeled a “moron.” For the next eleven years, Belchertown will be Donald’s home. Behind locked doors and barred windows, he is patient #3394.
Everywhere at Belchertown—in school, at work, in their dormitories—boys are segregated from girls. They are all “patients,” but like other higher functioning children, Donald is made to care for the “low grades,” feeding them, bathing them, changing their diapers. He shovels waste in the sewerage plant. He works for no pay in the warehouse, the bakery, print shop, and infirmary of this isolated community of the feeble-minded and forgotten.
He attends school on the grounds, his refuge, where he is treated with respect by his teachers. Everywhere else he is a “retard,” verbally and physically abused by understaffed attendants, and controlled by mind-numbing drugs. He watches other children leave with their parents on weekends and holidays, and envies them. Through a TV set, itself enclosed in a wire cage, he becomes aware that there is a better life somewhere beyond the barred windows. Reverend Martin Luther King Jr., an icon of justice, becomes one of his idols.
In his late teens, Donald graduates with a sixth grade education, is “paroled” to an orphanage run by nuns, and later lives on his own in a rooming house. Each move is a step beyond the institution, a step toward becoming a man, but Belchertown’s influence remains, constantly flashing him back. Yearning to shed the moron label, he resists being classified 4-F and is drafted into the army, but his past follows him through basic training, all the way to Vietnam. On his return to the states, he marries, has children, and holds a thirty-year job in the printing industry. Always resistant to authority, he becomes involved with the union.
Aided by his adult son, a ten-year search through a labyrinth of town hall documents and court records leads Donald to his siblings in South Carolina, and to his mother’s grave. In small increments, he acquires more understanding, more acceptance, more self-respect. He is successful in earning his high school diploma, even an associate’s degree at age 62. No longer a “moron,” he is hired by a human service agency to work with the mentally disabled, the same population that he grew up with, and becomes an outspoken advocate for their rights, their care, and their dignity.

You'll Like It Here--The Story of Donald Vitkus, Belchertown Patient #3394
This masterful account is told in stark language that never masks the protagonist’s voice.

Judge Tauro was instrumental in improving conditions in the lives of individuals with developmental disabilities.

April 2, 2019 TV interview about the writing of You'll Like It Here.

My book You'll Llike It Here, The Story of Donald Vitkus--Belchertown Patient #3394, is available here.

Ed Orzechowski is past president of Advocacy Network, Inc. He and his wife serve on the board of COFAR, an advocacy organization for families and guardians of individuals with developmental disabilities.